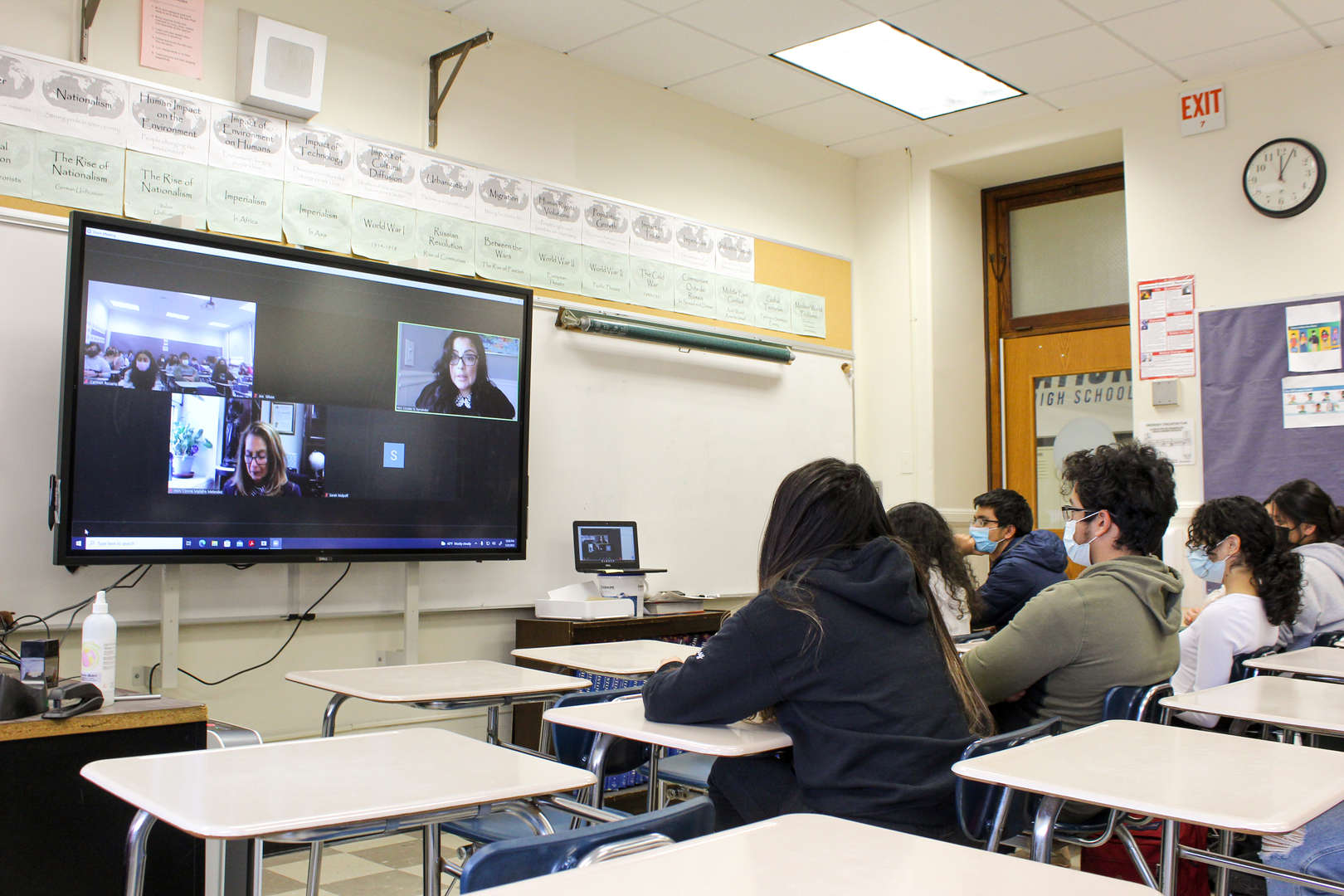 Students had sent her questions before they met via Zoom and Her Honor answered them:

What is your educational background?

Judge Fernández said she took a different route when it came to her studies. Rather than focus on pre-law, she studied history and philosophy before attending law school.

“Those were things that interested me. Anybody considering this there is no right or wrong. You can have a science background,” she said.

What cases were a challenge?

While she has had some challenging cases, Judge Fernández said that she does get to use her discretion.

“There are often equities and mitigating factors, places where I can make a difference,” for those who come before her. She said keeping an open mind and listening are valuable traits she taps into when presiding over a case.

Often, she said, judges must think outside the box. Is the person contending with substance abuse or have mental health issues?

“I’m a firm believer in second chances,” she said. “I always say a prayer before I sit because I am going to influence someone’s life.”

What does she do in her spare time?

Judge Fernández enjoys spending time with her husband, a police office in the New York City Police Department, and her son. She continues her advocacy work fighting for immigrants and animal rights, and she is active in several civic groups.

Her day, she says, begins with getting her son ready for school. When she arrives at the courthouse and puts on her robe, she takes a few minutes to pray and reflect.

“I always take that bench with a smile,” she said. “I take each case individually and treat it with respect.”

When court is not in session, she will spend time reviewing papers and motions.

How do you deal with people being disrespectful in your court?

“I am stern, but respectful,” she said. “I will not stand for disrespect in my courtroom. Kindness can take you a long way.”

How has COVID-19 impacted you and your work?

The pandemic had an immediate impact on her. She was appointed in 2020 and after three weeks of sitting on the bench, like so many other fields, the court went virtual.

“I took the unknown and used it as my driving force,” she said.

She had been using Zoom long before it became the norm and although she was disappointed to not be working in person, she adapted. She had been engaging in a paperless work environment for some time, so that was easy to continue, and she advised her staff on how they can best use the digital platforms they had available to do their work.

“There as a lot of thinking outside the box,” she said, while encouraging students “to make it work for you.”

What kind of music do you listen to?

Judge Fernández admitted she was not familiar with “trendy pop,” much to her son’s dismay. But she did enjoy salsa, a style of music her Ecuadorian immigrant father became familiar with when he first came to this country and lived with a family from Puerto Rico. She also enjoys Christian pop.

One way she enjoys expressing herself is to wear fun necklaces with her robe to “glam it up.”

Are you happy where you are right now in your career?

“I am very happy where I am right now,” Judge Fernández said. “It fills me with pride, being the first in my community, Peekskill has a high Ecuadorian population. Would I love to move up? Definitely.”

How similar are trials to what you see on TV or in the movies?

“They are not similar at all, other than taking the stand and the oath. They are never as sensational as you see, there is no ‘ah-ha’ moment.”

The only familiar aspect, she said, was how a courtroom looks, that is typically portrayed accurately.

“I would encourage you to visit a courtroom just to understand how the process works,” she said.

As a child the Honorable Lissette Fernández was on a career path before she even knew it.

It began with her shock of a child abuse case in which a young girl, Lisa Steinberg, was beaten to death by her adopted father. Ms. Fernández was about 10 years old at the time the story was in the news. By the time she was 12 years old, Ms. Fernández was volunteering at a homeless shelter, an experience that would cement her commitment to advocacy for those less fortunate.

The two experiences continue to influence her today where she resides on the bench of the Peekskill City Court. She was the first Latina woman to be appointed there in 2020.

On January 25 Judge Fernández spoke virtually with students in Joseph Gilson’s social studies classes and other history classes at Port Chester High School. She shared her experiences with students to let them know they too can do anything they set their minds to in terms of pursing their passion.

“I came here to share my story. I feel that there are many people living the same background,” she told students.

The discussion is a trial for a new partnership with the Latino Judges Association Speaker Series and the school, enabling judges to come into the classroom and discuss their careers with aspiring Latino students who may want to pursue a career in law. The discussion with Judge Fernández was assisted by school social worker Carmen Rosario and Mr. Gilson, who chairs the social studies department.

Judge Fernández immigrated to this country from Ecuador when she was seven years old, settling in Peekskill with her family. She did not know English but picked up the language quickly.

At the time one of her favorite things to do was to read. She spent hours at the local library and made friends with the librarian there.

When the news story broke about Lisa Steinberg, Judge Fernández followed the case closely. Her librarian friend helped her find information about the case and helped her better understand how the law works.

“I remember saying, ‘how can this be? How can I help,’” she said. “That is where my interest in law began.”

By the time she was 12, Judge Fernández was volunteering in a local soup kitchen. While there she met a lawyer who was also volunteering.

For as long as she can remember, Judge Fernández put her heart and soul into anything she did.

“I was the best volunteer at that soup kitchen,” she said.

It was an attitude she adopted in all her jobs, including when she worked as a dishwasher and a waitress.

“No job is too little to be ashamed of,” she said. “You never know who is watching.”

Her hard work made an impression. When she began to look at colleges, the lawyer she met helped her apply and mentored her throughout the process. She wrote her college essay about her experience as an immigrant.

She studied history and philosophy, subjects that interested her and said told the students there was no requirement to study pre-law. She attended Seton Hall University School of Law and went on to become a prosecutor and eventually an immigration attorney. She worked as an assistant district attorney and deputy attorney general. She also opened her own law practice in Peekskill.

“I advocated for many people, I circled back to what I had done when I was younger,” she said. “Being a prosecutor was a very powerful position.”

“Because you are an immigrant, it doesn’t mean you don’t try,” she said. “I had a drive to help, a drive to make connections.”

Making connections, she said, is crucial for anyone’s success and she encouraged students to make them whenever possible. She said it is an experience that can only benefit them and will also change the other person’s life too.

Being appointed as a judge was not easy, especially as a woman and an immigrant.

“I’m from a humble background, I stayed true to myself because of my origins,” she said as to what were contributing factors to her success.

There were times, she admitted, when she wanted to give up. But she took inspiration from her grandfather, who had immigrated to this country in the 1930s and worked as a dishwasher and taxi driver. Her mother too, was also an inspiration who taught her there were no limits to what she wanted to do, all she had to do was her best.