Tales told in the show

“Around the World in 8 Plays” takes the stage at PCHS

After all the worrisome issues that the community has had to contend with in the past year and a half, it might just be time for a good laugh. The Port Chester High School Drama Club has just the thing to help get the giggles out with their production of “Around the World in 8 Plays.”

“A group of off, off, off Broadway actors decide to go into the city streets and put on a collection of fairy tales,” Director Christina Baurle said of the show. “They are real tales, but none anyone has ever heard of.”

The show is part structured play, where the actors have to learn their lines and places, with a whole bunch of improv thrown in for good measure. Actors are responsible for multiple roles and an abundance of props.

“It’s very eccentric, crazy and fast paced,” Ms. Baurle noted. “Things are supposed to go wrong. We say play it up. What’s great is they have the best character voices,” she added.

Junior Caelyn Matturro has been in shows since sixth grade and plays the role of Bernado in this production.

“Since the pandemic made us all feel sad, I feel like seeing a comedy will bring people’s spirits up,” Caelyn said. “A comedy will be really helpful to everyone.”

Bernardo comes to the stage as a bit of a wise cracking individual who is often arguing with his wife, Isabel.

The role of Isabel is played by senior Britany Bautista who is performing in her first production.

“I wanted to try something new,” she said of why she decided now was the time to take the stage.

She enrolled in Ms. Baurle’s Acting for the Stage class and was hooked.

“It’s something out of my comfort zone,” Britany said. “It’s built up my confidence.”

“It’s fun and challenging at the same time,” said junior Anthony Perrone, who, among other characters, plays an orphan. “It’s fun because we can develop our own characters. It’s also challenging trying to make up something yourself.”

Despite the challenges, Anthony said, “it’s fun to get back into things.”

The show is the first live performance for the drama club since the pandemic began and the first to be performed now that the school offers theater classes taught by Ms. Baurle.

In addition, this performance includes a crew that was responsible for creating the set and finding props. It is a goal of the theater department to begin to incorporate more crew involvement in the productions. In the past, many of the scenes, costumes and props were purchased or rented.

“We want to make this a completely school-run experience for them,” Ms. Baurle said.

To that end, she is already looking toward the spring where the drama club will put on its traditional musical and something new too. Ms. Baurle said it will be a student-written production and will include the audience moving throughout the high school to watch various parts of the show.

Before that happens however, the focus is on “eight plays.”

During a recent rehearsal, students went through their scenes, sometimes incorporating new set pieces and testing out props. Britany had a fake snake wrapped around her neck because, well, why not? It is just the kind of show where a fake snake around one of the leads’ necks works.

Another character made himself laugh, along with the rest of the cast, when he tried out his fake eyes.

“It’s a great first show for all of us,” Ms. Baurle said of the return of live preforming. “I can’t speak enough of how hard they are working. They really are stars.”

“All right let’s give this a go,” Ms. Baurle said during rehearsal as students scrambled to their places.

“Around the World in 8 Plays,” by Patrick Greene and Jason Pizzarello, will be performed at the Port Chester High School Stage Nov. 18-20 at 7 p.m. and Nov. 21 at 2 p.m. Tickets are $10 online or $12 at the door. To purchase tickets online visit www.tinyurl.com/pchsplay21 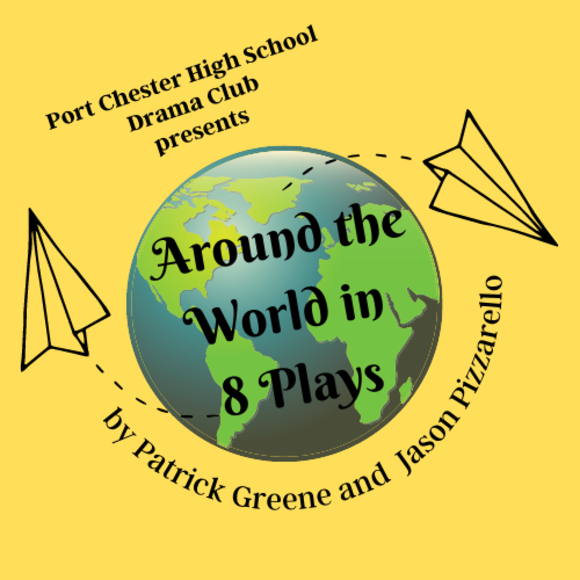